Water in the City

This year’s study trip focussed on “Water in the City” and the City of Rotterdam certainly did not disappoint on this headline.  After meeting at the IBIS hotel and introducing ourselves (as there were some new members in the group) we made our way to Blaak station to seek out the afternoon's venues. 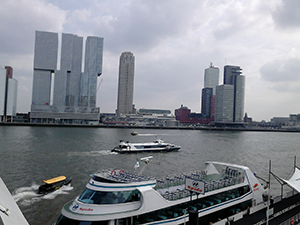 After savouring the sights and sounds of the Markthal – we all agreed on a suitable venue for dinner and a time to meet.  Some of us went back to the hotel to freshen up and some of us chose to wander a little further and soak up the atmosphere of the City in the Sky.  As darkness fell the city lit up in a rainbow of colours – its’ tall skyscrapers each reflecting the colours of their neighbours and making for a great photo opportunity.

The next day, Friday 1st April, dawned bright and sunny and we all met up in reception by 9.00 am so that we could walk the short distance to the Timmerhuis a building designed by the Dutch architect Rem Koolhaas and opened in December 2015. 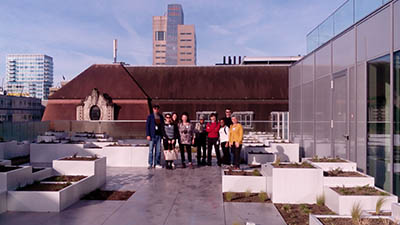 We met with Eveline Bronsdijk from Rotterdam City Council so that she could explain their strategy to deal with water.  The city landmass is 80% below sea level and Rotterdam City Council have developed and implemented several solutions in Rotterdam to drain and manage the excess water resulting from increasingly frequent incidents of extreme rainfall. In so doing, Rotterdam has secured a unique position in the world and has become the role model for other delta cities.   The Rotterdam Adaptation Strategy (RAS) seeks to protect both the city and its inhabitants from the effects of too much or too little precipitation by increasing awareness of climate change and the measures citizens can take to help themselves.   As a result of RAS Rotterdam has installed 219,000 m2 of green roofs, water storage infrastructure and developed strong urban water management systems. See links below for more information and presentations:
http://www.adaptationfutures2016.org/
http://www.rotterdamclimateinitiative.nl/uk/publications
http://www.rotterdamclimateinitiative.nl/documents/Documenten/ROTTERDAM%20CLIMATE%20PROOF%20ADAPTATION%20PROGRAMME%202013.pdf
http://www.100resilientcities.org/page/-/100rc/1WaterExchangeProgram.pdf
Following this presentation we were joined by Valerie Brown, a Canadian intern working with Rotterdam City Council on these initiatives and who had kindly offered to act as our guide for the remainder of the day.
We walked the short distance to the Luchtsingel, a wooden bridge which connects the centre area of Rotterdam to the once neglected Rotterdam North area.   Since the installation of the bridge and the development of a public area at the old station Hofplein and the Pompenburg park development on the old brown field site, this area of Rotterdam (known as Zoho) has been rejuvenated.

After this final visit Valerie left us to go back to her intern job and we all made our way on foot back towards the hotel crossing the iconic Erasumusbrug and heading through the Maritim Museum. We spent another pleasant event walking in the area known as Witte de Wittstraat – the coolest street in Rotterdam and had an amazing dinner in the Restaurant Bazar - a three floor restaurant which is part of an equally eclectic hotel focusing on all things middle Eastern.

The next day we all got up early, ate an early breakfast and checked out of our hotel taking the train from Blaak station towards Amsterdam Centraal and the area known as Ijburg (or Amsterdam by the Sea).
After hour on the train we arrived at Amsterdam Centraal station and the place was heaving, after all it was Saturday morning in one of Europe’s most visited tourist hotspots!  We soon found the place to store our luggage and were happy to set off by tram for the relative tranquillity of Ijburg.

After a well-earned rest and some lunch in one of the local cafes we took the tram back into Amsterdam for our Hop-On Hop-Off Bus Tour of Amsterdam.  We boarded the bus and all headed upstairs for the best views – along the way we observed many of the sights of Amsterdam and spent a happy hour in the Diamond Museum!